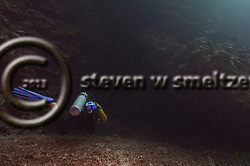 First Cathedral is one of the most visited scuba diving sites on Lanai and in Maui County.  It is a dual pinnacle site and is also one of the largest scuba diving sites in Maui County.   The mooring at the pinnacle is about 35 feet deep on the shallow portion and has a large arch on the west side.  The northern side of the site has a wall with lava caves, crevices to explore and a swim through arch.  A sand channel separates this from the wash rock pinnacle that comprises First 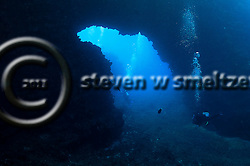 Cathedral.  The large cavern, of the Cathedral, has a maximum depth of 45’-50’ deep and a ceiling overhead which is approximately 20’ high.  It has a lace work of openings in the lava on the east wall that allows light in, in a manner suggesting a stained-glass window within a church or cathedral, from which this scuba diving site derives its name. 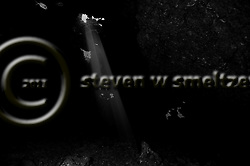 When you enter the water on the mooring you will swim first toward the Pinnacle containing the lava tube known as First Cathedral and then after exploring the “Chapel” as I like to call it, you exit rather quickly, or as some like to say, you are flushed from the First Cathedral to reef outside.  There is an opening on the inside of the Cathedral which has water rushing in and out with the actions of the waves.  You swim to the exit “portal” and then hold on as the water rushes into the Cathedral and then when the flow reverses you enter the portal and are rather quickly deposited on the outside of the reef.  This is not as intimidating as it might first seem as the opening is fairly large and you only travel a short distance before exiting on the reef.  That said, if you have a camera, please bring the strobes in before entering the portal and you should not have any trouble.  If this is too much excitement you can exit the Cathedral the same way you entered and simply swim around to the other side. 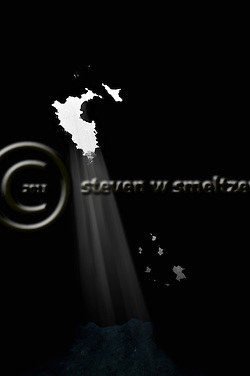 The Cathedral itself is an ancient lava tube that has several openings on the upper portion and side of the cavern.  These openings allow light to pass through them and provide some great opportunities for underwater photography.  I especially like black and white images of the cathedral as they seem to provide the most dramatic effects with the light.  The ceiling “window” provides very good lighting (assuming sunny skies) on a rocky outcrop in the middle of the room and you can see “rays of light” shining in from the top of the dome making for some interesting underwater photography.   The opening to enter the cathedral is very large and should not cause anyone concern.  First Cathedral can hold many scuba divers at one time but I find it best, especially when trying to take photographs, to be in a small gro 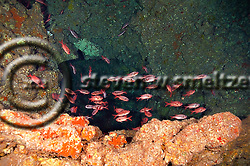 up or be first.  Having a larger number of divers will stir up a good bit of sediment making it especially difficult to take good shots.  It is also better to be in “group 1” verses “group 2” if you have a large number of divers on the boat as the silt in the Cathedral will tend to get stirred up as more divers are going through the cavern. 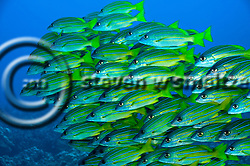 There are several archways to swim thru and the coral gardens are great places to look for eels, shrimps, and small crustaceans.  So take your time on this site and you will be well rewarded.