This is a great scuba diving site that just past the one year anniversary of the reefing of the ship.  The following is an overview of the dive,  some history and information regarding the ship
and an overview of what you will find on the wreck.  I have also just added over two dozen new photos to the gallery in honor of the one year anniversary of the reefing.

No more the ocean to roam

No more to fight the storm and sea

Rest well beneath the waves

View complete photo gallery or click on a photo to go to the gallery. 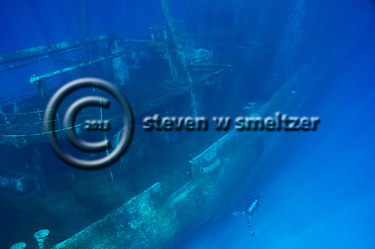 I would recommend heading to the stern before entry into the ship to get photographs around the “Kittiwake” logo on the stern and also get photographs by the screw (propeller) and rudder.   For Scuba Divers that plan on penetrating the wreck, you can then make your way to the top of the ship and enter via the main funnel which is located on the Bridge Deck.  If you do not plan on penetrating the wreck you can start your exploration on the main deck just above the Screw (propeller).

The main funnel makes an excellent photograph and I would suggest taking the photo looking up from the bottom of the funnel to the top of the funnel.  I would suggest silhouetting one of your dive buddies diving down into the wreck.  You can exit the shaft on the first platform or in the hold.  Note the hold deck does not have any exterior exit points and is not recommended for divers that do not have an advanced certification and prior wreck experience.  When you exit to the first platform you will be able to see the Engineering logo in the Motor Room area/engineering section.  This area is easily accessible and makes for a very good underwater photograph near the “Engineering Mural”.  The silt can be heavy here so you need to move slowly to prevent clouding up the water.  For advanced divers/wreck divers, you can also check out shaft alley and the forward hold areas of the ship.  For others you can explore the various compartments on the first platform and then begin making your way up deck by deck and then finally arriving at the Bridge (Pilot House) where you can do you safety stop as it is at about 5 to 6 meters or 15 to 18 feet. 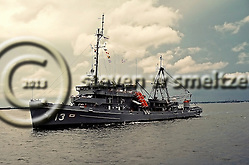 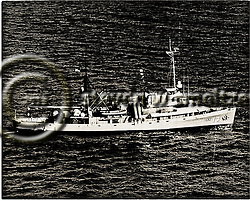 4. She was initially transferred to MARAD for lay up in the National Defense Reserve Fleet and then withdrawn from the fleet February 18, 2010 and prepared for reefing in the Cayman Islands.

The Chanticleer Class ships were designated specifically for submarine rescue. Each ship in this class was equipped with powerful 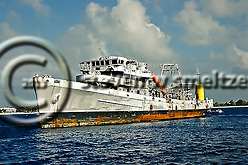 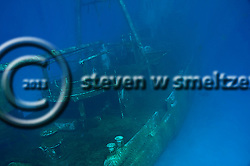 decommissioned from the U.S. Navy in 1994. Following her retirement, the ship became part of America’s National Defense Reserve Fleet under the control of MARAD, or the Maritime Administration, part of the U.S. Department of Transportation. The ship ended her career as the first MARAD ship sold to a foreign government for artificial reefing. 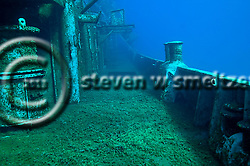 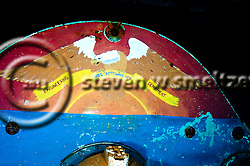 Association (CITA). Negotiations had to be conducted and funds raised to purchase the ship from the U.S. government and prepare it for sinking as a dive site, including removing hazardous contaminants and cutting openings in the hull and bulkheads to give divers greater access to the vessel’s interior.

After years of delays and concerns that the plan might never come to fruition, the Kittiwake began the first stage of its last voyage in February, when it was towed from its Reserve Fleet mooring at Newport News, Virginia, to the facilities of private contractor Dominion Marine. There, all the final preparations for the sinking were completed. The ship was sunk January 5, 2011 off the north end of Seven Mile Beach in Grand Cayman.

There are 5 decks on the 47 foot tall Kittiwake. Externally, the crow’s nest, mast and large stern a-frame have been cut down and remounted to make her height suitable for Cayman waters. The 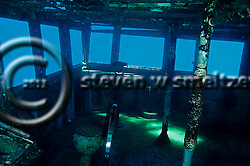 upper decks accommodate the 2 bridges (both an external and internal bridge to allow operations in heavy seas) along with the radio and navigation room. The sonar has been removed. The Captain and XO’s quarters are also on the upper decks.

On the main deck, from bow to stern, internally you will find the rec room, mess hall, ironing room, small tool workshop and recompression chambers. You will note the large a-frame structure on the stern that supported submarines and hard hat divers, as well as the diving bell 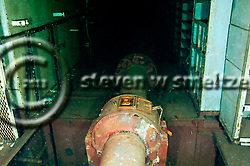 where divers would enter to return to the ship from the ocean and then be placed in the chambers for decompression.

Below the main deck, 2 decks exist that include the crews quarter, medic/hospital station, engine and propulsion rooms, air bank storage and compressors, as well as the steering gear, shaft, gyro, ammunition lockers, cold storage and barber shop to name a few areas. While the Kittiwake has been opened up with large access holes both vertically and horizontally, every space on the ship was used while in service. 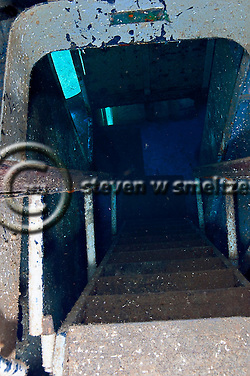