Tarpon Alley is a scuba diving site on the North Wall in Grand Cayman. It lies just outside of the North Sound and when the water is clear this can be a very good dive site. If you go to a Google maps and look at a satellite view you will see a cut in the reef directly between the North Sound and Tarpon Alley. You will also see a “plume” of silt washing out from the cut to the Caribbean sea. When there are heavy rains you will get runoff especially out of the

mangrove trees in the North Sound and will turn the dive sites next to this “cut” quite cloudy. The boat Captain, should watch this for you, but if has been raining alot/heavily ask to go to the dive sites closer to Rum Point as you will not get the same runoff on these sites.

Tarpon Alley, will normally have at least some Tarpon along with

good varieties of other fish on the dive site. I have dove here several times though where there are not any Tarpon. If you don’t see Tarpon here you can also dive Orange Canyon or Big Tunnels, good scuba diving sites on the West Side

This dive is definitely a “deep” dive. The average condition of the coral and amount of debris that tends to be in the water at the shallower depths on this dive site does not typically make this a good choice as a second dive. There are plenty of dive sites on the north wall that are in the same general are and do make good second

As you descend by the buoy line, you will see a reasonably narrow break in the reef. You will swim through this break to the outer wall

and you will typically find a few to dozens of Tarpon in the area. The Tarpon adults are about 4 to 6 feet in length (although you can see some larger) and weigh up to 300 pounds (for the largest fish). The males are typically smaller than the females.

As you swim through this canyon and exit on the wall, make sure to look carefully as there are

usually Spiny Lobsters tucked back into clefts in the coral. You can also find various crabs and shrimps especially around the cleaning 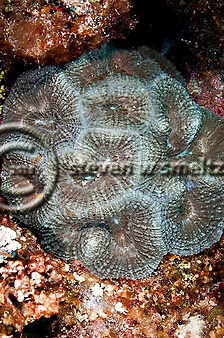 stations. I typically see a Nassau Grouper in the area at a cleaning station and you can also see moray eels and other fish taking advantage of the cleaner fishes such as Gobies.

You will also find some nice Deepwater Sea Fans on this scuba diving site along with cactus corals, Spiny Flower Corals, Great Star Corals and more along with various vase sponges and tube sponges. There is usually a reasonable variety of fish on the site and you may even find a Spotted Eagle Ray swimming off the wall, but they are not quite as prevalent on this dive site as they are on other sites on the north wall.