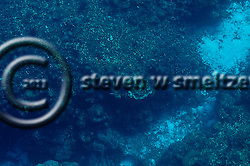 Roundabout is either a first/deep dive or many times I have been on this site as a second /shallow dive site on the north wall in Grand Cayman.  It can be quite good as it has a very good variety of soft and hard corals and normally has an abundant variety of marine species.  The downside of the site is that it can also be a bit turbid after hard rains 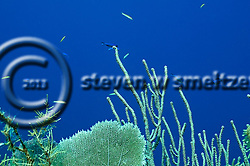 due to the close proximity to the cuts in the reef from the North Sound to the Caribbean Sea that allow “runoff” to cloud the dive site. 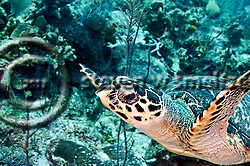 This scuba diving typically has sea turtles, such as the Hawksbill, or Green Sea Turtle.   You can distinguish the Hawksbill from the Green Sea Turtle by looking at its head and the plates between its eyes.  If you see 2 sets of plates – 2 between the eyes and 2 just about its beak/bill, then it is a 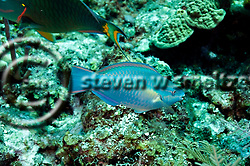 Hawksbill.  The Green Sea Turtle just has two plates between its eyes.  You will also see a variety of parrotfishes, such as the Princes Parrotfish or Stoplight Parrotfish, a variety of of small oval type fishes such as the Barred Hamlet, and if you look closely in the crevices within the coral reef you will find a variety of crustaceans and juvenile fish species.

This is usually a very relaxing and interesting dive, since it is done on top of the wall you have plenty of 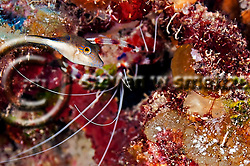 time to explore.  You will occasionally see a nurse shark or ray cruising the sand channels between the reef and there are always a good number of lobsters about, you just have to go slowly and look diligently.  I was trying to take a shot of an Eagle Ray that was “flying 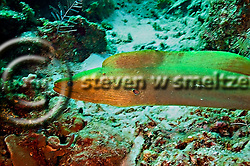 around the site” when I turned around and this Green Moray had just about jumped into my lap.  It just shows that it is a good idea to continually look around or have your dive buddy let you know when something interesting happens to swim nearby.  Just don’t use pulling your hair as the signal, but that is a story for another time…. 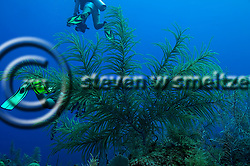 Typically you can do this dive as a dive buddy and your only responsibility is to monitor your air and your computer to make sure you don’t get into “deco” time.  You can also follow the dive master around to see what they can help find.  Either way, I like to cruise the top of the wall for a bit and look out into the “blue” to see 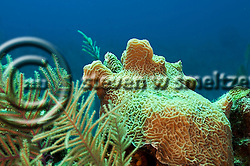 if anything interesting is around.  I then usually swim very slowly over the top of the reef and enjoy the variety of soft corals that are on this site and also look for smaller marine animals that might make a good shot.